ORION UPDATE:
Happy Halloween! We had a surprise overnight stay from Grandma. She arrived shortly before the school bus returned Orion and he was bursting with excitement when he saw her greet him.

Then at around 5:45 PM the masses of trick-or-treaters started to descend on our neighborhood. This year we had a lot less kids for some reason. We counted 220 trick-or-treaters. Still a lot…but less than normal. We even ended up with lots of left over candy.

Orion happily put on his costume and went door-to-door with Grandma and Mommy. He was really enjoying it saying “how bout we go to this house, you wanna go to that house too?!”. We were so impressed with his ability to cope with such a social and scary experience. He liked it so much that after we returned home he went out for a second round with Mommy and Daddy.

Anyway, Daddy stayed up very late the night before carving our pumpkins. It was well worth it because what he did was quite amazing. We had many compliments on our pumpkins this year. 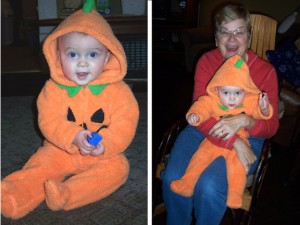 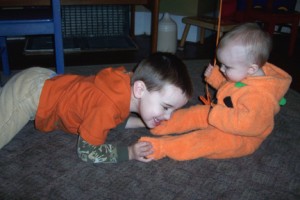 OLLIE UPDATE:
It was Ollie’s first Halloween and he was the cutest little pumpkin! Ollie enjoyed a visit from Grandma and some fun floor play with Orion.

Orion’s new thing is that he imitates Ollie’s hacking laugh. His laugh sometimes sounds like he’s hacking or choking on something. It’s very odd but still kind of cute. Orion has picked up on it and occasionally I find them hacking together on the floor in a repeating circle of laughter. It’s so good to see the boys interact.

Ollie did not trick-or-treat because he slipped into a deep sleep mode early. Consequently he was up most of the night waking and sleeping and waking again. Fun stuff!