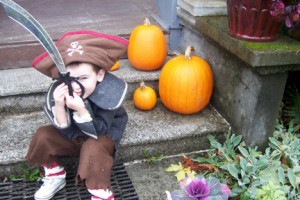 Well, the day of the feared Halloween party finally arrived and amazingly Orion put on his costume with little to no fuss at all. Trying to take a picture of him was another story.

The most popular costume at the party was Superman, since there is nothing to wear on your head. Apparently our kid is not the only one with issues about wearing things on his head.

Orion took his pirate hat off immediately after entering the party but kept the rest of the costume on. He refused to eat the special gluten free/casein free food there but had fun playing with all of Grant’s toys.

None of the kids really played together. They all played side by side. But it was still a good time.

I just hope he still tolerates the costume in 10 days when it’s halloween.