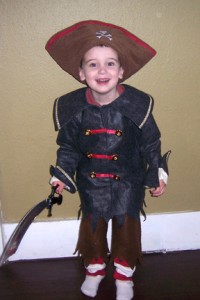 Well, we attempted to get Orion into his Pirate Costume earlier last week and he freaked out.

So, today in our ABA (behavioral) therapy we decided to deal with his reluctance.

Evelyn made a fun game out of it. She put the hat on her head and said “count to 3 and then jump up and take it off my head…1, 2, 3!”. Then we repeated that with Mommy wearing the hat, and various stuffed animals and puppets wearing the hat. Finally we had Orion wear it and took it off his head at the count of 3. We did the same game with the other parts of the costume until Orion was wearing all of it. Then he didn’t want to take it off.

He went to school and upon his return home the first thing he said was “Mommy, I want to wear my pirate costume”. Let’s just hope he still loves it this coming Sunday when he goes to a costume party!