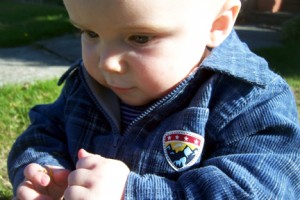 Well, it’s still a challenge to get food into Oliver. Today while Orion was at preschool we went to Fred Meyer and they had a sippy cup on sale that I wanted to try for him. It is compatible with his bottles. So, I got one and he seems to like having handles on a bottle and a sippy lid. But I haven’t seen him do much more than just chew on the sippy nipple. He sucked once and found out that if you do that stuff comes out. Then he promptly stopped sucking.

I have been trying the distraction technique but it’s more and more challenging because he’s on to me. He knows I will try to distract him and shovel a mouthful of food into him or make him drink from a bottle. By the end of today I was back to syringing food into him. This is so completely tiring!

Anyway, here’s a picture of him from yesterday playing outside in the grass and the sunshine. We’ve gotta maximize that sun exposure while it still exists. I won’t be long before we’ll be living in complete darkness and overcast for months. Oh the dread!