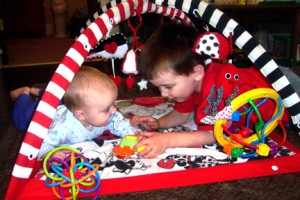 All of a sudden Oliver is wanting to nurse and eat constantly. I guess he’s hit a growth spurt. It’s a very good thing since eating has been such a challenge for him. I was sitting on the rug with him today eating a banana when he reached up, grabbed a chunk off of my banana and shoved it in his mouth. I was a bit concerned that he’d choke or something. But he just gummed it until it was gone. I tried to give him another piece but he started to gag on it so it’s back to finely pureeing things.

Ollie and Orion are still recovering from colds but are generally much better. The weather has been very, very damp though and it seems to keep the phlegm hangin’ around.

Anyway, I was putting a load of laundry in and came back into the room to find both Ollie and Orion under the dangly toy. Orion was helping Ollie play with his toys. It was very cute.