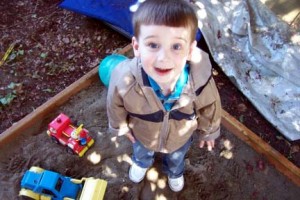 ORION UPDATE:
Day three without Daddy and we are still sad. However, the sunshine made us a little happier today.

Orion is socializing a lot better. On the school bus he made eye contact with 2 different kids and called them by name as he said goodbye to them today. While that may seem like a small thing for most 3 yr olds…in his world, it’s big!

We played out at the sandbox today. It was nice to be outside. We miss daddy, even if Orion won’t admit it. 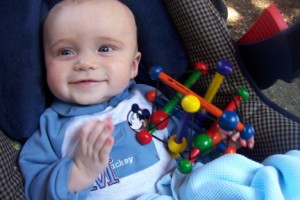 OLIVER UPDATE:
Today it was clear and sunny. After big bro’ Orion headed off to preschool, Ollie and Mommy went for a walk around the Capital area. As soon as that stroller hit the pavement Ollie was out. It’s so hard for him to stay awake on a bumpy ride. He almost always sleeps in the car and stroller.

Oliver started out the day so alert and vocal. Sometimes it even sounds like he’s saying “I love you”. Maybe that’s just what I want to believe. Here’s a picture of him doing his morning yoga stretches. Aunt Kathy and Uncle Seong Yoon would be so proud. 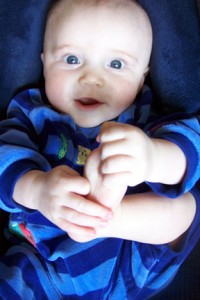 After Orion returned from preschool we all went to the side yard to play in the sandbox. Well, Ollie just hung out in his car seat and watched Orion run circles around him. How strange it must be to have a wild and crazy older brother!