A rook party with Ollie 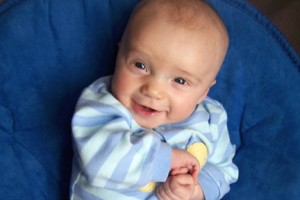 Tonight we had our friends Christy and Jeff over to play Rook and have some Gluten-Free snacks!

Big brother Orion went to a friend’s house while Ollie hung out during the card game in his car seat. He loves his car seat. Because of his acid reflux he needs to always be at a slightly upright angle, so the car seat is perfect for him to lounge around in.

Ollie was awake during the whole gathering but just sat and observed without much fuss at all.

We played men against women and the men beat us by far. Oy! Maybe that’s because when you count Ollie, there were 3 guys but only 2 gals. Heck, if you throw in Baxter (the dog) there were 4 guys. We were simply out numbered!