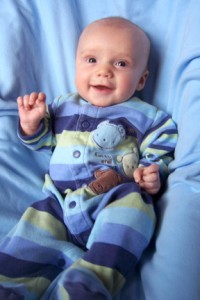 Oliver has been a bit fussy lately. It seems like something is making him uncomfortable. It might be his acid reflux since I changed the time that I give him his medication. Who knows?

Then moments later he can turn around and be so happy and social. He coos and aahs and smiles at you. It just melts you.

Even saying all of this…I still think he is one of the easiest babies to care for. He generally sleeps well, he travels in a car well, he shops well, he sleeps through my bible study class, he sits quietly in his car seat through MOPS. He is just easy. He doesn’t even freak out when his brother yells in his face when he’s sleeping. He just looks stunned and goes back to sleep. He’s a go with the flow kinda guy. You gotta love that!