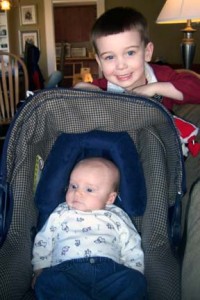 Yesterday Orion freaked out when he got on the school bus. But today he was a bit better. It seems like lately he’s had a lot of big, loud screaming meltdowns. That usually happens when something is up with him that he can’t vocalize…like either he’s sick, or he’s growing. Let’s hope it’s that he’s growing because we’ve had enough with sickness!

Baby Oliver has become increasingly interested in his big brother. He likes to coo at him and smile. Orion likes the attention too. Orion just doesn’t like it when Mommy or Daddy gives Oliver attention instead of him. He tells Mommy “Put Oliver back, give Oliver back!” I don’t know who he’s expecting us to give Oliver back to.