Some alone time with Mommy 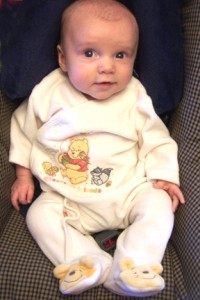 Big brother Orion went back to school today after a week off for mid-winter break. Ollie enjoyed his alone time with Mommy this morning. He was giggling and smiling.

Ollie’s disposition is so calm, happy, and charming. Grandpa Gadget remarked on how he almost never cries. It’s so true. If Ollie is crying or fussing then there is a REAL problem. Unlike his brother who fusses regularly just for attention. Let’s hope the charming personality continues into toddlerhood.

The squeaking still happens but it seems quieter to us. That’s odd because they told us it would get louder up until he was 6 months old and then get quieter. But it’s either quieter, or we’ve just gotten used to it.