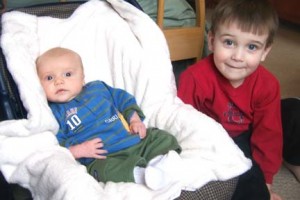 ORION UPDATE:
Yesterday Theresa, the school bus driver, said that Orion was completely out of sorts and throwing lots of tantrums and that he might be sick. She suggested we keep him home today so we did. But, honestly, we saw no signs of sickness. We think his fussiness was just typical Orion stuff.

He got a new computer toy with a phone and played with it most of the day. He kept trying to make Ollie talk on the phone.

In the evening Aunt Kathy and Uncle Seong Yoon watched Orion while Mommy, Daddy, and Ollie went out for a Valentine’s Date.

Apparently, Orion was as happy as can be while Kathy and SY watched him. But as soon as we got home he was distraught and wanted us to go away. He got nicer when Daddy brought out some Valentine’s chocolate for him though. 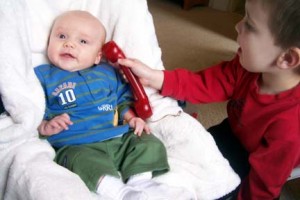 OLIVER UPDATE:
Since Orion was home from school, he was quite the source of amusement for Ollie.

Ollie is having a lot more awake hours in the day. His eyes are tracking things around the room a lot now. He seems to be fascinated by Orion and his constant noise and chaos. He looks all wide-eyed at him like he’s trying to figure him out.

Orion got a new toy with a phone and kept trying to make Ollie take a phone call. It was funny.

Then in the evening Daddy and Mommy went out on a date and took Ollie with them. One of the ladies at the Japanese restaurant asked if our baby was okay because of his breathing noises. We were surprised she noticed over the noise of the restaurant. Ollie stayed awake through most of dinner but was calmly observant. Then he fell asleep on the car ride home.