My first adventure out with both boys 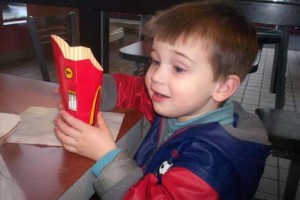 Mommy was trapped at home with Orion who had too much energy to burn and was bouncing off the walls. He kept asking to go in the van but it was rainy outside. So…Mommy decided to load up both boys and go to McDonald’s for lunch and play on the climbing toys.

This was the very first time that Mommy had ever taken both boys out by herself so it was a big deal. Orion is very hard to control alone. But with Oliver and Orion it’s almost mission impossible.

We drove through the drive-thru to order the food first. Then we parked and got everyone inside only to find out that the play area was locked because an employee took the key home and they couldn’t get in. Yikes!

So there Orion is wanting them to open the door and Mommy can’t explain why they can’t. But he agreed to sit in a booth and eat his hamburger. He’s just recently started eating more things. And while we don’t want to get him going on fast foods, anything new is improvement for him.

After eating, Mommy had to bribe him to get back in the car. But we all got home safely. It may be a while before we try a group outing again without Daddy.

Another note…Orion is officially 3 1/2 today!