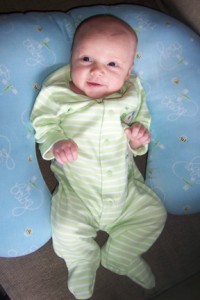 (Photo taken: 2/2/07, almost 7 wks old.)
Okay, I’m trying out this blogger software until I have time to actually design a blog for Oliver. I have been so busy that I have not posted a single thing about Ollie since he was born. So…here’s an update…

Oliver is now almost 7 weeks old and it’s been an interesting 7 weeks. When we first brought him home from the hospital it was a huge challenge for Mommy to manage both boys. Orion is not exactly a quiet, verbally obedient fella. He likes to move around a lot and is hard to instruct from afar. But, since I’m frequently nursing, that poses a dilemma. So, I’ve lowered my standards. Before it used to be “No, Orion…don’t ever touch that pen”. Now it’s like…”Okay, you can play with the sharpie and color the dog, but please stay off the couch”. Oh how things change.

Anyway, Oliver started making some strange hiccup sounds and labored breathing at about 4 or 5 weeks of age. We took him to the Pediatrician and were told it could be one of 3 things…2 being minor things and one being a life threatening, major thing. So we were sent to Children’s Hospital in Seattle for X-Rays. Then we were sent to Mary Bridge in Tacoma so they could stick a tube up his nose and view his voice box.

Fortunately, it turned out to be one of the minor problems. It’s a condition called Laryngomalacia. In simple terms that means that Ollie has an underdeveloped larynx (voice box) that collapses and blocks his airway causing him to labor a bit and make squeaky noises. It doesn’t hurt him. It doesn’t really effect his sleeping or eating either. It just means that he will make lots of noise for a while. They say he will grow out of it by age 2. So..now we will tell all caretakers..”If the baby’s squeakin”…don’t start freakin’!”