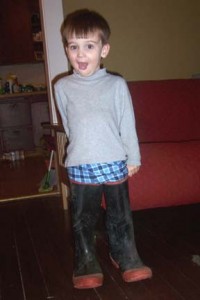 What a whopper of a day! This one goes down in the record books as one of the craziest mornings.

It started out with the early morning (6:30AM) discovery that Baxter, our lovable 85 lb German Shepherd/Collie, had been up at night with diarrhea. He had busted out of his kitchen gated area in attempts to notify us..we were all asleep upstairs. He didn’t quite make it and proceeded to make a huge mess all over the living room floor and walls. It was horrible.

Upon discovery, John dutifully tried to clean most of it up before leaving for work while I watched Orion who was barricaded in the play room. But John had to leave for work and I was left with the aftermath.

I kept Orion in the play room and fed him breakfast there and got him ready for school. As soon as he was off on the school bus I went to work scrubbing and cleaning. Then I realized that not only did the house need cleaning, but so did Baxter, who was covered!

How on earth was I to do this? Well, I lured Baxter with cheese upstairs into the shower stall and got in there with him in my underwear. The only way we both fit in the stall was for me to straddle him…in my 8 month pregnant state! It was CRAZY. Baxter knew this was odd so he was quite compliant. After our lovely shower together I put him in the cleaned up kitchen and proceeded to scrub the new messes we made on the way up to the shower.

Then, as if that wasn’t bad enough, I realize we had no baby wipes left and I’d have to make a Costco run. I showered, changed clothes, and ran to Costco only to get yelled at by some really rude man because he believed I had stolen his prized parking spot…a debatable thing! Now I was on the verge of tears. But it was almost too comical of a morning to even cry so I just moved on. Oy!

Orion came home and was as busy as ever. I was attempting to assemble our new baby stroller in the kitchen when I noticed Orion had been still and quiet for a long time. I looked over at him and he was wearing John’s rubber work boots and couldn’t move or get out of them. It was funny! Maybe when Baxter sleeps tonight we’ll make him wear the work boots too so he can’t make messes all over the house!!!