A weighted vest and a tricycle 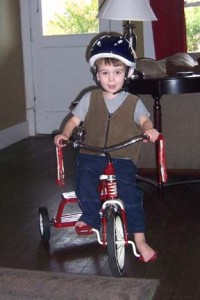 Daddy is out-of-town again. We miss him much!

Today Orion went to his Occupational Therapy appointment and it went fairly well until we had to leave. But that was just a minor meltdown.

Then we went home to meet with his Preschool Teacher for a home visit. She told us that Orion really enjoys music time and books at school but doesn’t much like circle time or snack. No surprises there. But overall, she seemed to be very positive about his progress.

Here is Orion wearing his new, weighted vest that a good friend of ours graciously made for him. As soon as I put it on him he was happy and talkative. Then he spotted a bike helmet in his closet and insisted on wearing it and riding his tricycle in the house. Normally he hates hats or anything on his head so I attribute this acceptance to the vest.

He has a small crush on a little girl at school named Chloe and he named one of his little toy people Chloe. He put her on the back of the trike and pretended to talk to her as he rode around. It was cute.