A visit from Aunt Kathy and Uncle Seong Yoon 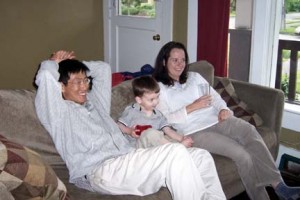 Today John was making his fancy, home made calzone when we got a call from Aunt Kathy and Uncle Seong Yoon.  They were working in a town South of us at a meditation retreat and wanted to stop by.

After eating some tasty calzone, Orion forced them to sit on the couch and watch “A Charlie Brown Christmas Special”.  It’s a bit out of season since it’s June, but he is obsessed with it and I have watched it a half dozen times in the last week!

Anyway, he had fun bossing his Aunt and Uncle around.