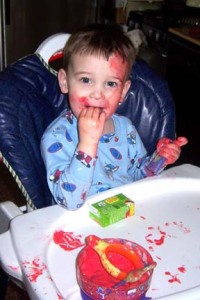 Orion has been rejecting food again.  He used to love gogurt (yogurt in squeeze packs) but suddenly won’t eat it.  So…I thought I’d squeeze the gogurt out into a bowl and see if he’d eat it from there.  Wow…it was a very bright, red color!  At first he had no interest in it.  But about 30 minutes later he was having fun smearing it all over his face.  Finally, he decided to put some in his mouth and you could almost see him thinking “hey…that’s not bad.  I like this stuff!”  Anyway, here he is at the moment of taste discovery.  Funny boy.

After the gogurt smearing he had a bath and then we ran off to his Occupational Therapy appointment.  He played very nicely there but didn’t really attempt to eat any new foods.  Oh well….we had enough achievements for one day.  We’ll try more later.