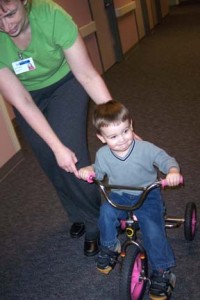 Today we had two appointments.  First, Barb from the school district came by to play.  Orion had fun and was very tolerant.  He even cleaned up the toys when he was done with them.  Good progress.

Then, after lunch, we had an appointment Bridget, the OT at St Peters hospital.  She is working on helping Orion transition from one activity to the next.  Our hardest transition is leaving so she came up with the idea of letting Orion ride a tricycle to the elevator.  He had never ridden a tricycle before because he usually doesn’t like the movement.  He was hesitant but then he warmed up to it and really enjoyed it.  Here he is on the trike with Bridget guiding him.