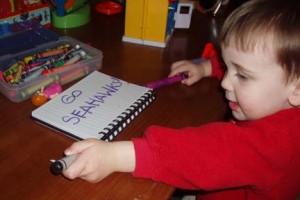 Today was super bowl Sunday and the Seattle Seahawks were playing against the Pittsburgh Stealers.  The Seahawks haven’t made it that far since 1984 so it was pretty exciting.

John went off to a church super bowl party while I stayed home near Orion who was napping.  Then John came home at half time and when Orion woke up they colored with crayons.  Looks like Daddy helped with this particular drawing!

I didn’t watch most of the game.  Instead I went to the gym and Wal-mart.  Both places were nearly empty.  The Seahawks lost but it was still fun to hear all the buzz in the air!