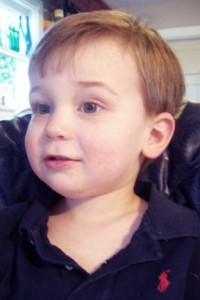 Trauma Day!  We woke up early to head out to Orion’s OT appointment.  He was a bit fussy leaving the house.  Once he got there he seemed fine at first.  But about 15 minutes into it he had the most extreme meltdown I’ve ever seen of any kid…including those kids on that Super Nanny show.  He was completely out-of-control and inconsolable. He was hitting both me and his occupational therapist.  I made the executive decision to go home.

He screamed the whole way home.  He screamed during his time-out period.  He was kicking, hitting, screaming…the works.  Finally he calmed down, I gave him milk, I rocked him in the chair in his room, and he fell asleep for 3 hours…even though it was many hours before nap time.  He just wore himself out (and me too!)

Now he is awake and watching school house rock.  He seems okay…but you never know.

I think his schedule was just so completely disrupted when we were out of town that he just needs to acclimate.  At least that’s what I’m hoping.

God give us strength!!!