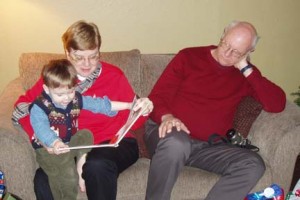 It’s Christmas Day and Grandma and Grandpa came over to open presents and have breakfast.

Orion opened a little puppy dog in a go kart toy and was frightened by it.  It made loud noises and moved quickly and somehow it scared him.  After opening that…he was afraid to open other gifts.  So we just put his gifts aside for later and discretely opened ours.

When Orion went down for his nap, John and I took off to go see “The Lion, The Witch, and The Wardrobe” while Grandma and Grandpa babysat.  It was a very good Christmas!