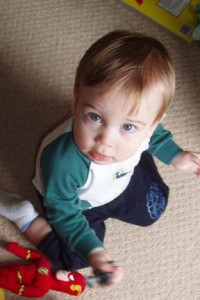 This weekend was very busy. John worked feverishly on some pending electrical problems which required our power to be shut off for some time. Then on Sunday, after everything was fixed, a storm knocked out our power. Orion and I were forced to play by the light coming through the windows. No videos either. Probably a good thing!

Here is a picture of him playing with his flash doll by the window. He got mad at me for putting a hawaiian shirt on flash. He has big temper tantrums these days and gets lots of time-outs in his crib. But it’s hard to resist those blue eyes!